The power of a user group is evident once you attend. With a room full of engineers and designers who all use the same program, there’s a great chance of discovering a new technique, feature or process that elevate a design. A few of us from Alignex attended the Sioux Falls meeting to join the discussion which ranged from new features of SOLIDWORKS 2015 to facts about the larger SOLIDWORKS community.

User groups are a great place to learn more about SOLIDWORKS and engineering in general. There are also lots of video resources as well as offerings in schools and colleges. Here are a few interesting stats about the community of SOLIDWORKS learners: 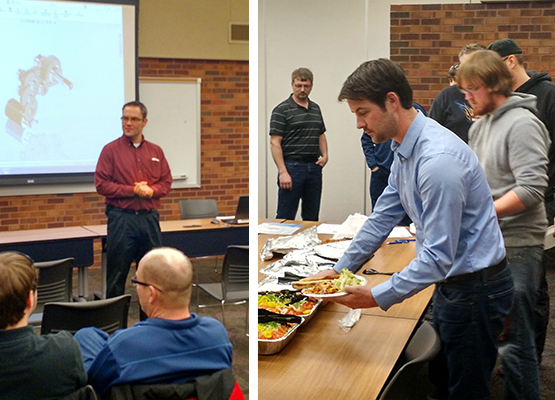 At the Sioux Falls user group, much of the session was focused on learning more about the new features in SOLIDWORKS 2015. Some of these features were added to improve performance such as with load times. Many others were added because of requests by users. Here are a few that seemed to stand out:

Whether you come interested in learning about a new feature, meeting more users or discussing an exciting part of your work, a user group meeting is a great opportunity to expand your network and maybe even become a little quicker with SOLIDWORKS in the process. If you are interested in attending a meeting in the future see if there’s a SOLIDWORKS user group near you. Or contact your regional rep: Richard Wand (Midwest). A Special thanks to Brad Hakeman of Sioux Falls group for inviting us!