Lots of changes in the hardware and software fronts in the last couple of years. Let’s take a look at the latest!

Customers frequently ask us for some guidelines on the best hardware to run SOLIDWORKS on. Luckily, there are some simple guidelines on configuration to help you pick the right type of workstation for your needs. In this post, we will list each of the major types of components and describe how each of the characteristics affect SOLIDWORKS performance.

Since SOLIDWORKS is now exclusively 64-bit and we can take advantage of as much RAM as you can stuff in to a computer, we are tempted to put as much in as possible. Although I am very much in the camp of more is better when it comes to computer hardware, the reality is that people and companies often have budget limitations they have to deal with. With that in mind, use the following chart to guide your decision regarding RAM amounts.

This is a critical component. The card you select is more important than ever in SOLIDWORKS!

Here the two main players are Nvidia and AMD (who acquired ATI). These two companies own the market for workstation class graphics cards. What is a “workstation class” graphics card? They are a special type of graphics card that are specifically meant for 3D engineering and scientific applications (like SOLIDWORKS). There is a lot of variety regarding models and features but to keep it as simple as possible, just remember this. Each vendor has an entry level card, a midrange card, and a high end card.

These special graphics cards are tested by SOLIDWORKS and confirmed to work correctly with each version of the software that gets released.

In the past, there was not much if any benefit in purchasing a “high end” graphics card for day-to-day CAD performance. That all changed when SOLIDWORKS introduced “Graphics Boost” 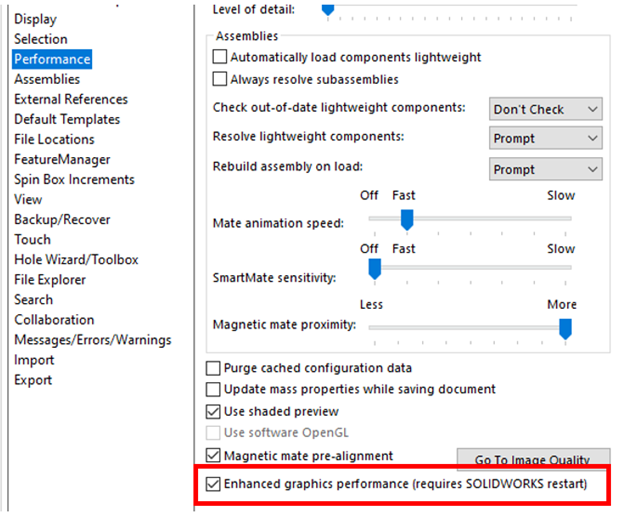 Now there is measurable benefit in regular CAD workflow in buying a card above the entry level or midrange. Previously, these high-end cards only would benefit a user if they were doing very specific tasks like rendering high res videos etc.

In SOLIDWORKS 2021 even more improvements can be seen. The programmers at SOLIDWORKS have changed the code to even more advantage of your GPU (graphics card). Some of the calculations that used to be done by your CPU are now being offloaded to your GPU. Having a current and fast GPU will pay large dividends with the latest versions of SOLIDWORKS

Our current recommendation for performance workstations running SOLIDWORKS is the QUADRO RTX 4000 or QUADRO RTX 5000. These cards give a great balance between cost and performance!

Graphics and video related problems are one of the most common types of calls we take on our Alignex Help Desk from our SOLIDWORKS end users. It’s very important that you are running on an approved and tested by SOLIDWORKS paired with the correct driver to ensure a smooth experience in SolidWorks.

The CPU (central processing unit) is your main computer’s main brain. Not only does it do most of the “calculations” it’s also responsible for coordinating the rest of your computer’s activities (graphics, networking, printing, etc.)

There are two main companies that make CPU’s that run windows PCs. Intel and AMD.

In the previous decades, Intel has been the clear leader in market share for engineering workstations (we’ll talk about the reasons why in a bit) but just recently AMD has possibly taken the crown.

Intel made the fastest CPU’s for CAD due to their faster average clock speed compared to AMD. However, in the last decade or so, both AMD and Intel have been hitting the wall in regards to being able to design new CPU’s with faster clock speeds. This is due to the manufacturing process and the limitations of our current chip design technology (transistors). So, both manufacturers started making new designs with more cores rather than making new chips with faster clock speeds.

Having more cores (threads) helps in only *some* specific areas of SOLIDWORKS regarding performance. Examples are things like FEA or rendering with Visualize or PhotoView 360, but in general day to day work in CAD there are no big benefits in performance to adding more and more cores.

Then, just recently AMD announced their new processor design called RYZEN. The Ryzen family of CPU’s has offered many cores at a reasonable price but the most recent designs (5000 series) has an amazing improvement in IPC (instructions per clock cycle). This is very important for CAD since it’s so math heavy. If the CPU can do more operations per clock cycle and its approximately the same clock speed it should be faster. Initial reports are that the 5000 series Ryzen have an almost 20% advantage in IPC. I hope to get my hands on one of these soon to benchmark it in SOLIDWORKS!

There are some important changes to which versions of MS Windows and MS Server are supported! Please pay close attention to this, if you are getting ready to upgrade to 2020 or 2021. Of note, is that as of SOLIDWORKS 2021, Windows 7 is no longer supported as shown in the reference chart below.

For the complete details please click here (link to https://www.solidworks.com/sw/support/SystemRequirements.html) 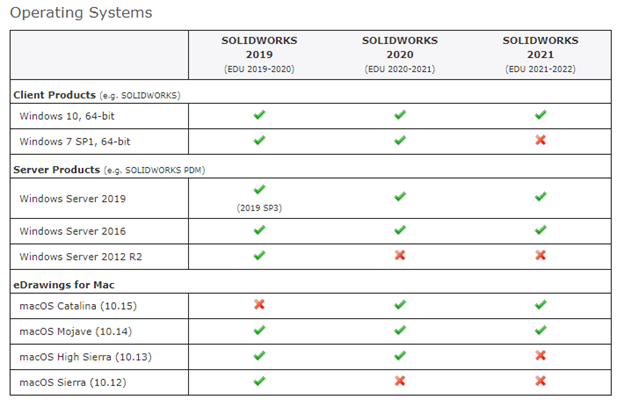 If you are in the market for a new CAD workstation, here are the ingredients you should look for

NOTE: If you want a custom-built workstation designed to run SOLIDWORKS ask your Alignex account rep to get you a quote or call 1-866-378-6829 x7

If you’d like to purchase a name brand workstation already preconfigured consider these options.