A few weeks after the first reported case of the new coronavirus, called later COVID-19, in China, end of December 2019, tremendous and radical changes in daily life in china as well as in the entire planet have been observed gradually. China started to close cities like Wuhan, the center of epidemic, restrict travelling, shutdown most of industrial activities starting mid-January 2020. These unprecedented measures were taken to contain the virus and stop its spread to the whole country. The World Organization of Health (WHO) had declared COVID-19 a global pandemic on March 11, 2020. The number of affected countries and deaths have continued to climb exponentially, and a state of emergency was announced in most of the countries. Usually crowded, most of the very known and populated cities and capitals such as Paris, Milan, Berlin, Barcelona, Madrid, London, New York, were seen deserted. 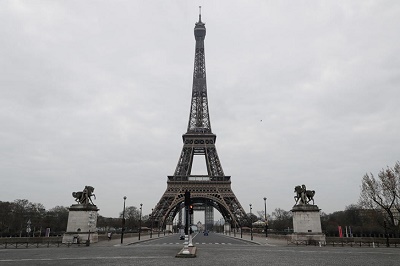 Figure 1 - a) An empty area in front of the Eiffel Tower in Paris, as a strict lockdown came into effect in France to stop the spread of COVID-19, by Ludovic Marin/ AFP [1]

Most of the world economics are shuttered, two-thirds of the world passenger jets are grounded [2], two-thirds of world population are staying or working remotely at their homes. Billions of cars and other transport are idle. This led to significant reduction in emissions and improved air quality in many parts of the world. It was interpreted through satellite images taken earlier in Jan and Feb 2020 above China and compared to images taken for same period of 2019. US, space agency NASA says that the maps, shown in Figure 2, demonstrate dramatical falling levels of nitrogen dioxide* this year [3]. This was due to the new regulations, related to the pandemic, forced by the Chinese government. This reduction of greenhouse gas emissions has been noticed later around the globe as the same regulations were applied. 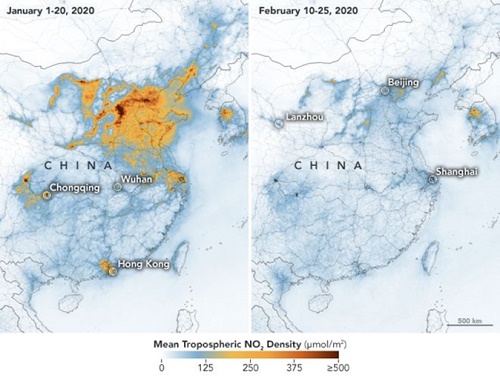 *Nitrogen dioxide is used often as an urban pollution tracer since it is produced by burning fossil fuels. It can be easily measured by satellite.

The COVID-19 crisis has shown us how greenhouse gas emission will be if we were using electric vehicles. Transportation contributes to 28% of the total CO2 emission in the atmosphere in the US[3]. “In 2017, 27 % of total EU-28 greenhouse gas emissions came from the transport sector (22 % if international aviation and maritime emissions are excluded). CO2 emissions from transport increased by 2.2 % compared with 2016 [4]. Globally, emissions coming from the transport sector are a major contributor to climate change — about 14% of annual productions (including non-CO2 gases) and around a quarter of CO2 emissions from burning fossil fuels[5]. 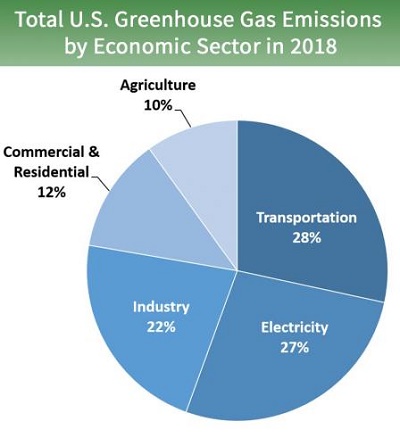 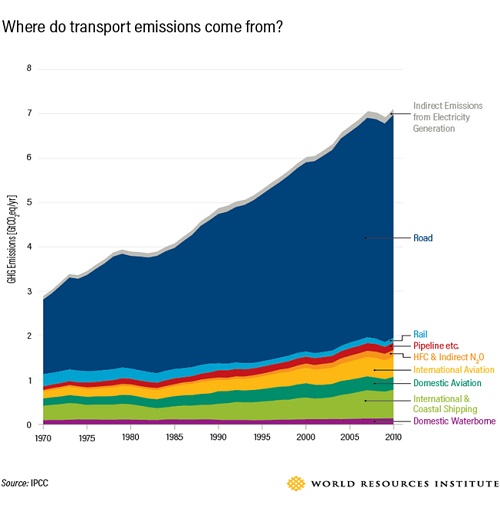 Decarbonization of the transport sector would help to significantly reduce the gas emissions and lead to cleaner air. COVID-19 has proved that air pollution would be decreased significantly if our cars were using electricity as source of energy. The contribution of road transportation in total transport sector gas emission is 70%. Unfortunately, the positive impact of this new virus on the air we breathe, will not last too long if we go back to the old way of living.

What if all those people, who were at home during the lockdown, owned electric vehicles or went to work using transportation powered by electricity? The surprising images taken by satellites coincident with the lockdown imposed by the deadly virus, would be our daily life. However, as we said above, transport sector produces only quarter of the total CO2 emission. Could electric vehicles be the only answer?

The answer is no. But with the contribution of the international efforts that work hard to reduce different sector gas emissions and having much more electricity produced by renewable energies, there will be less ejected gases. The global warming impact will be contained, and our planet could recover. Climate change effects can be widely limited.

Besides, numerous epidemiological studies found a clear link between viral respiratory infection and air pollution [7] [8]. Hospitals admissions for respiratory diseases have been associated with the breathed air quality. People, where the concentration level of particulate matter is high, are considered vulnerable and have higher risk of contaminations and infections by Influenza and bacterial pneumonia. COVID-19 crisis is a great demonstration to show the powerful impact that widespread electric vehicle adoption could have on the air we breathe. This should stimulate companies and governments to work and invest more in innovative electric vehicles with higher efficiency and lower cost. During the past few years, the race to have an electric vehicle with comparable characteristics to internal combustion engines, is going too fast and more companies have been involved. This concurrence led to put more competitive cars in the roads. By 64% increase compared to the same period of the previous year, the total number of sold electric vehicles reached 5.6 million cars worldwide in 2019 [9].

Computer CAD design and simulation in profit of cars electrification

Battery and electric motor are the main keys of any zero-gas emissions vehicle. Hence, engineers, researchers and labs are working to design and develop more reliable products that could meet any user requirements. In this blog, we will focus on the electric motor design and simulation.

Figures below show 2D and 3D CAD models, created with SOLIDWORKS, of the 2004 Prius electric motor. Toyota Prius is among the earliest mass-produced hybrid car in the world. It came with an Interior permanent magnet synchronous motor (IPMSM). The Prius 2004 electric motor has the specifications data shown in table 1.

The interior PM synchronous motor of Prius 2004 has 48 slots and 8 poles buried inside the rotor laminations core. Both rotor and stator cores are made of laminated steel M-19 (stacking factor is 0.94). This studied motor has 3 phase distributed windings, single layered with 9 turns per slot connected in series. Buried synchronous machine offers higher torque values compared to surface mounted machine. The torque is composed of two components: permanent magnet torque and reluctance torque. The V-shaped magnet housing is designed to increase the quadrature axis reactance, and this will help to obtain higher reluctance torque synchronized with PM torque.

The rotor initial position is chosen as following: a north rotor pole axis (d-axis) is coincident with the phase AA’ axis. The cogging torque is the torque generated by the interaction between the ferromagnetic core and the permanent magnets. Prius IPMSM cogging torque results are shown in Figure 6. The no-load torque has a sin-wave shape with period of 7.5 deg (360 deg/48slots). It reaches its peak of 1.79Nm at 2.5 deg. Figure 7 shows the magnetic flux density distribution at the position 0 deg when the windings excitation is zero. 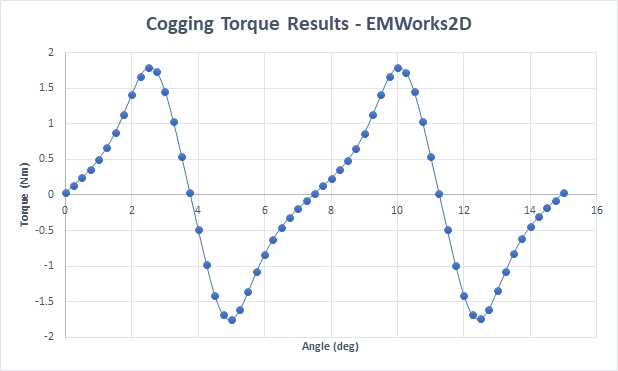 Measurement results realized by labs and published in [10][11][12], show the locked rotor torque results at different current rates. Figure 8 contains comparison of the torque results at different current values between EMWorks2D and measurement data. It shows that the peak torque can be reached around 60-68 deg (mechanical angle). Peak torque values versus current are plotted in Figure 9. 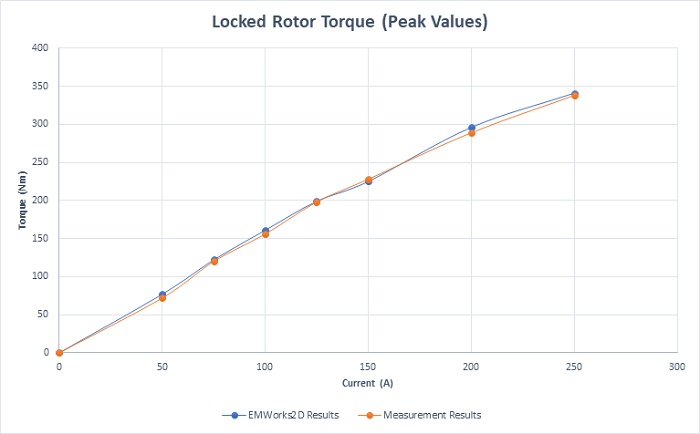 The PM synchronous machine is supplied with sine wave excitation (230A RMS, 80Hz). The rotor speed is 1200 RPM. Figure 10 shows the magnetic flux density at 0 deg. High field spots are located near to the rotor magnets bridges. Animation of the magnetic field is shown in Figure 11. Load torque results are illustrated in Figure 12. It is oscillating between 434 Nm and 339 Nm. 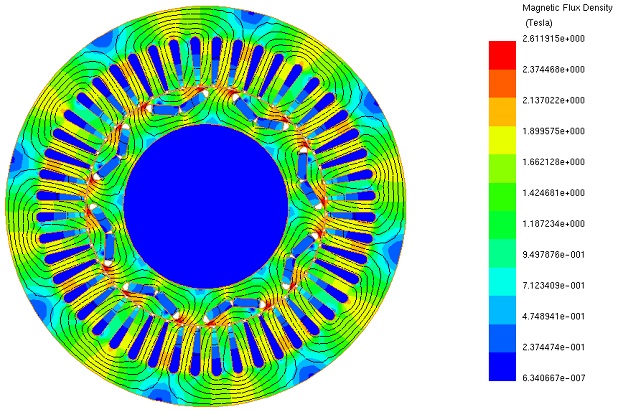 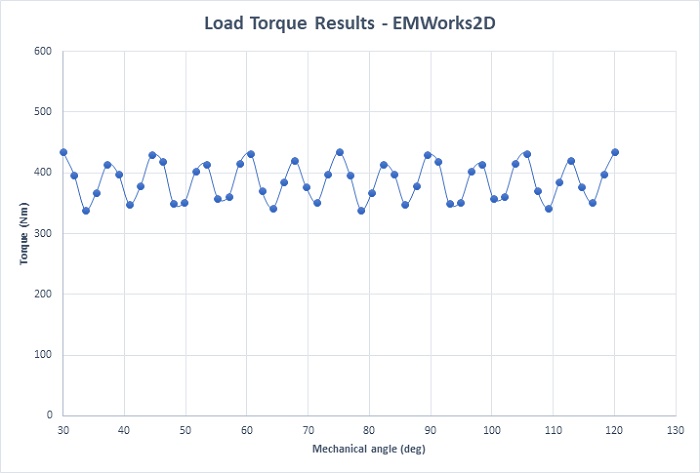 Despite the damage done to the world and its residents, the new coronavirus has demonstrated some positive impacts in greenhouse gas emissions. This temporary impact could be made permanent if the greenhouse gas emissions are reduced. Car electrification is one of the main solutions which can help to achieve this target. During the past few years, the development of autonomous and efficient electric cars showed an important progress. The use of computer CAD design and simulation software has demonstrated its reliability to improve major components of an electric vehicle like the electric motors. EMWorks provides novel and easy to use products to help modeling and simulating electric motors inside SOLIDWORKS.