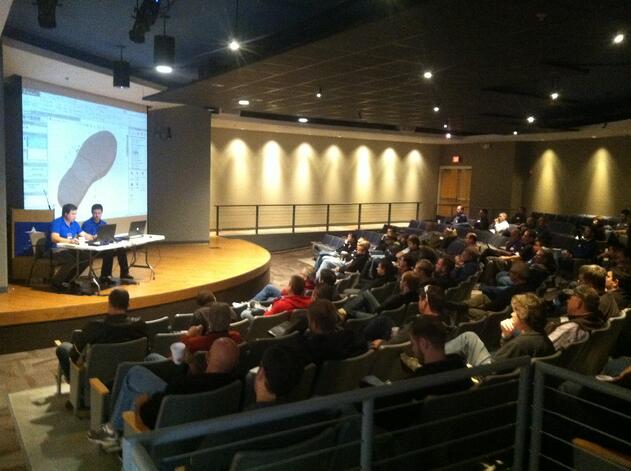 Few things seem to mesh better than a conference for engineers and designers hosted at an air and space museum. Enter SAS, the Strategic Air and Space museum near Omaha, NE. Recently we hosted an event there that brought together people from a multitude of industries to unveil the new features of Dassault’s latest SOLIDWORKS release. Covering everything from weldment and sheet metal updates to some brand new pattern features, we sought to gauge some of the response from all of the well experienced users. So here it is: 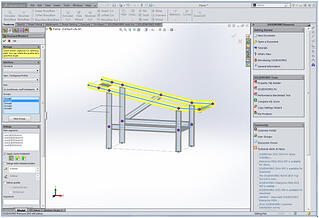 Many times weldment designs can quickly become large and complex. One of the new features in weldments should establish more control in this type of structure building. To help alleviate some confusion there’s now a visual color display system that shows the active group of weldment members and a pop-up indicating its group number. It becomes easier to recognize a certain group for doing things like translations and adjustments for your structure. There’s also a new pop-up dialogue menu that assists in selecting members to trim before applying the corner treatment.

One update that may alleviate some user chagrin is the ability to now apply a weld bead to multiple bodies and across weld gaps. Where previous versions of the program might make multiple beads, SOLIDWORKS 2015 can now create one continuous one. One of our users from a recreational power vehicles company said, “Features like this for weldment angles should be more user friendly and add time savings.” 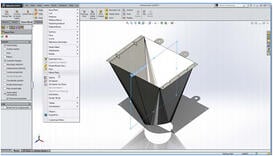 For companies such as Con-E-Co who use sheet metal in products, the functions in SOLIDWORKS help them to eliminate some time involved in calculations. Brad, a designer at Con-E-Co, mentioned that they are now able to “let the program compute it” and “it becomes more parametric.” Con-E-Co makes self standing and mobile concrete sites among other products.

Some of the new features include a function for creating Lofted Bends with non-parallel end surfaces. As an example, you can now create an exact shoot angle for a grain bin or auger more easily. Previewing Sketch Bends to the final angle for predicting a successful build has been added as well as enhanced flat patterns that show things like gussets and mirrored part information more fully. These updates could be a direct result of user-feedback. As SOLIDWORKS points out, about 90 percent of the new features are. 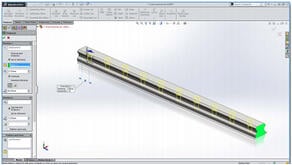 One of the most helpful things about CAD in general is the ability to duplicate features so replication of efforts is minimized. The new pattern features should bring that point home further. The linear pattern that’s commonly used for holes or fins, is now able to reference length. This translates to less reliance on equation generation and user input because the instance and space information auto-adjusts based on length of member. “This can cut down on time and make the model more parametric,” said an engineer from Conductix. Conductix-Wampfler makes product transport and power-line motion systems for in-house logistics among other things.

Two more pattern features worth mentioning are firstly, a new fill pattern update that shows the instance count in the left hand property manager dialogue. This gets updated to the drawing sheet itself for manufacturing and also adjusts as you make changes. In the past we’ve heard designers talk about the need for such a feature. The ability to swap a pattern feature for a pattern body or vice versa is now also included. This might help in creating a more complete Bill of Materials or eliminating the need to delete and rebuild a pattern feature when a child relies on it.

Overall, the feedback at this SOLIDWORKS event in Nebraska was positive. Users pointed out that SOLIDWORKS 2015 is full of new features and tools. Things like the weldment visuals, lofted and sketched bend enhancements, and pattern improvements that users have been looking for. Looking around the SAS museum towards the end of the event, one could only guess how nice some of this technology would have been to have in the plane designs. Take just the sheet metal functions for example, it makes it easy to flatten a sheet form from a surface which then updates a view in a drawing. Now that could definitely have been used in the fuselage design for the SR-71.