The History of SOLIDWORKS

As we know, every year SOLIDWORKS releases a new version with hundreds of new features and functionalities. Ninety percent of these enhancements come straight from you, the customer. While thinking about how much it has changed since I started, I decided to compile the highlights of SOLIDWORKS through the years. We tend to take many of these enhancements for granted now, but they were truly groundbreaking at the time they were released. From innovative new functionalities, to all-new product offerings, this blog post will put you in a time machine and take you on a journey through the history of SOLIDWORKS.

It all started in 1993, when founder Jon Hirschtick recruited a team of engineers with the purpose of making 3D CAD more accessible. Hirschtick used $1 million that he earned while a member of the acclaimed MIT Blackjack Team to get his new venture off the ground. The team’s goal was to build an easy-to-use, affordable software built on the Windows platform. This was truly revolutionary; all other popular CAD systems were built on Unix at the time. After a couple years in development, the initial release of SOLIDWORKS finally came... 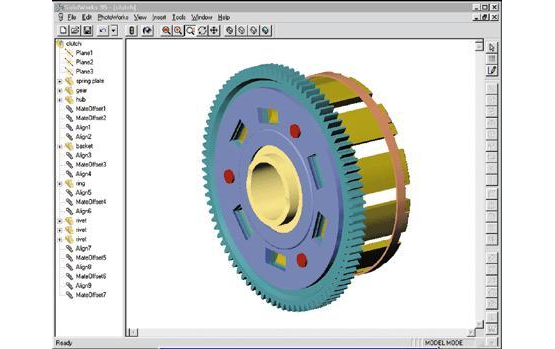 As you can see, SOLIDWORKS has continued to change the game of 3D CAD since its inception. Powerful new functionalities and features, along with new product releases, have kept SOLIDWORKS true to its original mission: to make CAD easier to use and accessible to everyone.

Thanks for checking out the Alignex Blog. Interested in giving SOLIDWORKS a test-drive? Try SOLIDWORKS Premium in your browser with an online product trial - no install or download.

Written by Sam Oanes
Sam Oanes is an Application Engineer at Alignex, Inc. When Sam isn’t helping customers on the help desk or teaching SOLIDWORKS classes at Alignex, he enjoys running, camping and fishing.