Captain America's shield is one of the strongest pieces of tech in the Marvel Universe, but how strong? With the release of Captain Marvel next week, we gave Alignex application engineer Mike Dady the task of answering that very question with the help of SOLIDWORKS Simulation.

The other day I was sitting on the couch watching a Marvel movie, and I realized Alignex had not explored the Marvel Universe with SOLIDWORKS in a while. I decided this travesty had to be corrected.

So I started wracking my brain on the wealth of source material available, looking for inspiration. It finally hit me while watching Captain America get knocked around in a movie. Just how much abuse is Cap, and his shield, taking? Can that even be calculated? Well with a tool like SOLIDWORKS Simulation, it can. 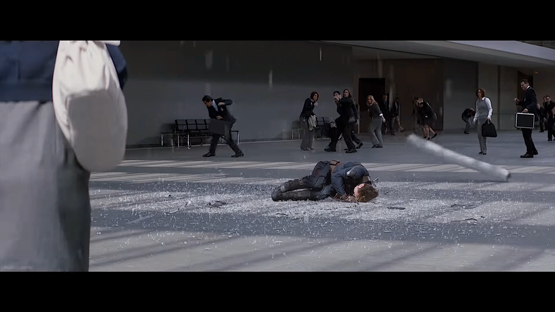 Armed with an idea, it was time to take a deeper look at the material. Cap is one super-strong human, but he is not even close to the weight class of the Hulk or Thor. Watching the footage, it is obvious that Cap’s “super-power” is his ability to take a beating.

Today we’ll focus on Cap jumping out of an elevator at roughly 20 stories, and surviving. Definitely to the surprise of Agent Stillwell. That particular scene is tailor made for SOLIDWORKS Simulation. We can easily calculate the speed at impact, and do some educated guessing on the makeup of Cap’s shield. 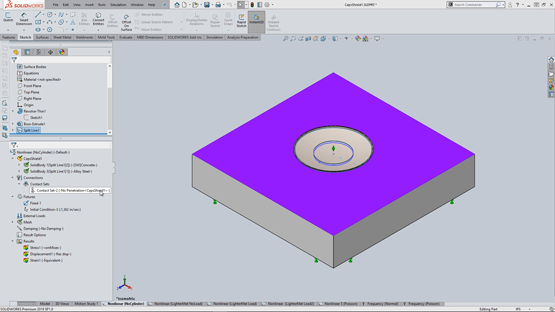 Once inside SOLIDWORKS, it was easy to model a reasonable representation of Cap’s shield, and a chunk of concrete to run it into. I made the shield a quarter inch thick. Although the thickness will impact the results, keep in mind we are assuming the shield is not going to yield, and we’re doing this for fun.

With the modeling complete, it’s time to simulate. As stated, the material we use will have linear properties. However, a Non-Linear Dynamic Study is needed. To represent this problem correctly, we need a No Penetration Contact between the shield and concrete, and that type of Contact is not available in a Linear Dynamic Study. 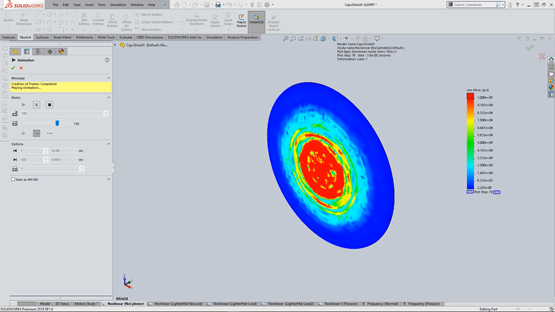 For loads and fixtures, start by fixing the concrete in place, and then set our initial velocity for the shield. I used 20 stories to calculate the impact velocity, and that puts Cap’s impact speed at roughly 77 mph.

Like most studies with contact stresses, a Mesh Control was placed on the center 12” of the shield and concrete.

As we found earlier when investigating Thor’s Hammer, the Sim Properties needed to be modified. The end time was significantly reduced, as well as the time increment. We also altered the Advanced Options for Max Incremental Strain and Singularity elimination factor. 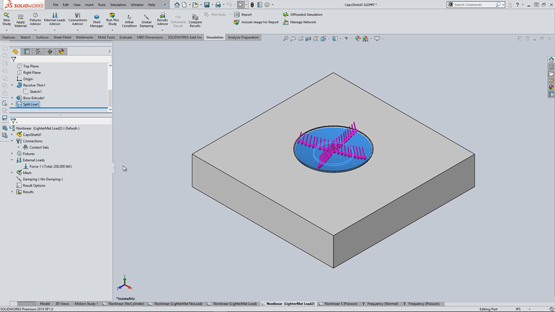 Initially, alloy steel was used to get a baseline for comparison. Also, Cap's momentum was not included in the analysis. The results show the Max Von Mises Stress in the 350,000 psi range. Nearly three times the material Yield and Tensile strength. Not surprising for sheet metal at those speeds.

Since Cap’s shield is theoretically not made of steel, the next change was to create a Vibranium material in SOLIDWORKS. Howard Stark mentions that Vibranium is 1/3 the weight of steel. Since we are dealing with bodies in motion, the density change reduces the stresses to just over 200,000 psi. Still quite a bit higher than the tensile strength of alloy steel.

Since Vibranium is supposed to be ‘vibration absorbent’, I changed the Poisson’s ratio to .49 and re-simulated. As expected, this ended up distributing the stresses more evenly. Running a frequency analysis shows lower Resonant Frequencies for the Higher Ratio as well. 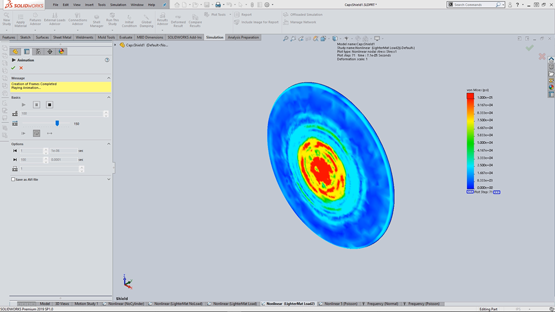 Lastly a force was added to simulate Cap’s momentum. I used a moderate number based on hand calculations. The results show it did not have a significant impact on the shield stress values, but it did increase the center area of high stress.

After all that, it is easy to see that Captain Rogers is one tough guy. He really can ‘do this all day’. Using SOLIDWORKS Simulation to improve your company’s products will help them ‘go all day’, just like Cap.

Thanks for checking out the Alignex blog! For more Simulation related content, make sure to check out our Simulation Resource Library below!

Written by Mike Dady
Mike Dady is an Application Engineer at Alignex, Inc. Mike spends his days working with customers to resolve their manufacturing issues and helps them to improve on existing product designs. If he’s not solving customer challenges, he’s probably at home customizing his snowmobile or working on a home improvement project.