Work on Your Designs Like Never Before with Virtual & Augmented Reality

Now I am not old by any means, but I'm certainly starting to feel like it. I remember a time when something like virtual reality was found only in movies and TV shows. I would stay up on Friday nights watching Star Trek: The Next Generation as a kid, dreaming of what could be possible if something like the holodeck actually existed. It was a distant pipe dream that only seemed possible in the world of science fiction.

Well, not anymore. As technology continues to grow at warp speed, we've seen entire industries go from startups to market disruptors in only a handful of years. One of those very industries has been virtual and augmented reality.

What does this have to do with me?

At this point, everybody has a general idea of what virtual and augmented reality is. The majority of us at some point have interacted with one of the many headsets out in the wild today. Up until now, most of the functionality has been limited to games or demo experiences. A lot of "check out what's to come" applications that don't offer very much other than a quick distraction.

Times have changed, and many of these headsets have begun integrating into various common software applications, including SOLIDWORKS.


Where can this help my business?

There are many ways that a company can benefit right now from VR and AR technology. Some of them include:

Now imagine the competitive advantage you would receive if you were able to not only preview your designs on your desktop, but also at 1-to-1 scale in your office, shop or home. The ability to walk around and tweak everything from display states to material to color would give you the creative freedom many have only dreamed of.

From a sales standpoint, imagine walking into your next product demo with a 3D, interactive prototype that allows the user to see it in action on site. That kind of functionality wasn't possible a few years ago. It is now. 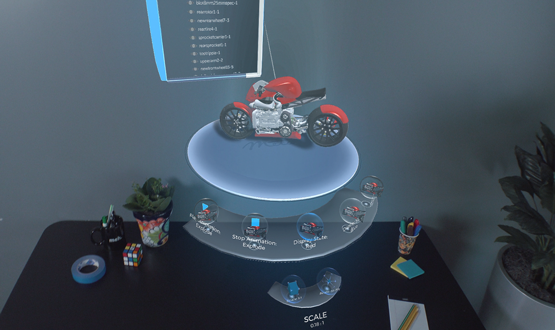 Where do I start?

Luckily, things are still early enough in development that you can still be one of the early adopters if you act soon. The sooner you get on board, the sooner you can define your company as an industry leader when it comes to 3D design and development.

Only you know where this kind of functionality can be implemented in your business. However, for the first time ever, it is clear that this isn't a question of if, but when you want to be considering this for your business.

If you are interested in taking the next step, we are now offering the Meta 2 headset (featured above) here at Alignex. Contact us today to learn how the Meta 2 can help take your design process to the next level.

Also, don't forget to subscribe to the Alignex blog to never miss out on anything in the world of SOLIDWORKS.

Written by Kevin Breindel
Kevin Breindel is a Digital Marketing Specialist at Alignex, Inc. When Kevin isn't working on content creation and SEO, you can find him enjoying the outdoors, watching the game or scouring the Minnesota wilderness for the elusive Sasquatch.